Testing is a substantial ingredient of software quality. Projects producing Quarkus extensions are not an exception. While testing on traditional JVMs is rather fast and well understood, testing GraalVM native executables brings new challenges, especially because it takes long: It is one or more minutes for common test projects that we have in Camel Quarkus. Multiply it with our ~300 extensions and you end up with tens of hours for a single pass of the CI. Let’s discuss some ways how to speed up the native testing, esp. by merging several test modules into a single test module.

(Feel free to skip this if you know well how Quarkus extension tests work.)

Here we primarily speak about integration tests that typically consist of a small application in src/main and a couple of tests in src/test that validate the behavior of the application. The test module is supposed to depend on the tested extension and the application is supposed to make use of that extension. As an example, look at e.g. the ActiveMQ test in Camel Quarkus source tree.

There are test classes of two kinds in src/test/java:

For this very reason, native tests must communicate with the tested application via network (or filesystem, etc.). In JVM tests, there are a couple of other options, like directly injecting beans via CDI. We avoid using this in Camel Quarkus, because our *IT tests inherit from their *Test counterparts so that JVM tests generally check the same functionality as native tests.

As we have pointed out already, compiling the test application to native executable takes a substantial portion of the overall testing time.

Which options are there to speed it up?

Of course Quarkus integration tests can be run in parallel on multiple worker nodes. It is easy to implement in environments like GitHub Actions and indeed, we are keen on utilizing it in Camel Quarkus.

The not-so-good news is that GitHub Actions limits the number of concurrent jobs to 20 (in the free tier at least). That currently makes our pull request verification to take around two hours which is still outside of my comfort zone.

What other optimizations can be implemented?

Falko Modler works on introducing Gitflow incremental builder to Quarkus. While it has tremendous potential, it is still work in progress. Let’s wait and see how well it goes in Quarkus.

This is actually the idea I wanted this blog post to be about 🙂.

Here, A is thought to be some common base that is found in both (1) and (2). We typically have this situation in our integration tests - they all contain quarkus-core, camel-quarkus-core, quarkus-resteasy (plus all their transitive dependencies) and last but not least all the Java runtime classes.

We assume that especially for test modules, whose dependency sets differ by just a few small JARs, "merging" them together into a single module may save some native compilation time.

We actually did this since a log time, e.g. with our AWS extensions, but nobody bothered to gather some real numbers to confirm or deny the hypothesis.

What could go wrong?

Before I show you the benchmarks, let’s discuss what are the risks and drawbacks of test grouping.

James pointed out once that "extensions may fix each other". If extension A forgets to register some class for reflection that extension B does register, then, when the two are used together in an application, B provides the necessary config and the tests pass. However, if A would be alone without B in a test application the tests would fail because the registration for reflection is missing.

For this reason, hard coding multiple extensions' tests into a single test module might be risky. Ideally, it should be possible to have both: the faster grouped setup for pull request verification and the slower but methodologically cleaner isolated setup for proper nightly/weekly/pre-release verification.

I have recently split a couple of AWS tests properly and I have also put some tooling in place that generates the grouped module semi-automatically.

In that way it is easy to run the tests both in isolation and grouped whichever suits better for the given use case.

And thanks to this setup, it is also quite easy to compare the duration of the grouped and isolated execution.

My measurements were not perfectly scientific, because I performed just a single round and I had other programs running.

Here are the numbers: 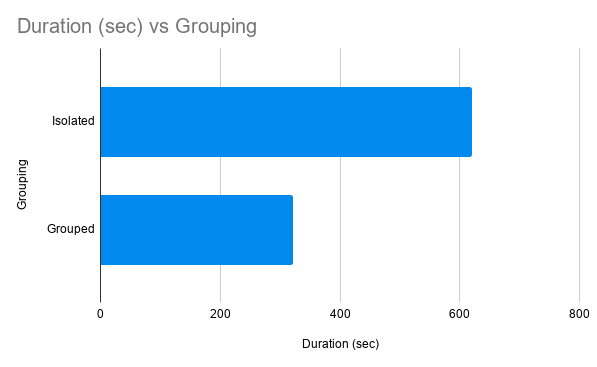 The time difference is about 5 minutes and it might be a bit more on slowish CI worker nodes. That’s definitely worth the effort!

We are planning to add more AWS tests in the near future. It will be interesting to see how the grouped module scales with the number of tested extensions.

Thanks for reading and stay tuned for more posts about Quarkus, GraalVM, Apache Camel and mvnd!

Jan 31, 2021
Using GraalVM native-image-agent when porting a library to Quarkus